The Overall Shape of My Theory About Aristotle & Alice

My theory is that Lewis Carroll possibly used the major lessons of Aristotle’s logic to structure his Wonderland and Through the Looking Glass, including the ten categories, the ten sorts of things that can be said about anything in Aristotle’s Categories, and four statements, the four ways something can be said about anything in Aristotle’s On Interpretation, which correspond to the four “perfect” forms of the syllogism in Aristotle’s Prior Analytics and are also known as the four corners of the Square of Opposition.  The overall lesson of both books about Alice is patience over time and tolerance between positions to balance between extremes, the overall lesson of Aristotle’s ethics. 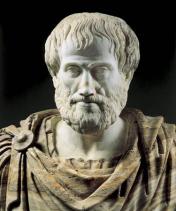 Here is the overall shape of my theory regarding the ten categories and four statements, with more evidence for each and more about balance and ethics to follow.  I am in the process of working out the evidence and details, but Carroll knew Aristotle’s work on logic well and there is much that corresponds well with both books about Alice.

If we take Aristotle’s order of the ten categories from the beginning of Aristotle’s Categories, and we reverse their order, as if seen in a mirror, starting with passion, the last, and ending with substance, the first, they correspond remarkably with the order of events of both books, chapter by chapter, together.  The first chapter of each work is about passion, with the White Rabbit of Wonderland and the Black Kitten of the Looking Glass.  The second chapter is about action, with the swimming Mouse and the running Red Queen.  The third chapter is about state, with the Dodo’s caucus race and the Gnat on the Train.  The fourth chapter is about position, with Alice taking a position in the White Rabbit’s house and between Tweedle Dum and Dee. 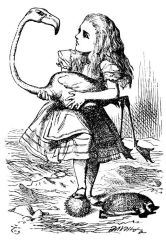 The fifth and sixth chapters of each work are about time, space and relations interwoven together, with the Caterpillar, Cheshire Cat and Duchess of Wonderland and the White Queen, Sheep and Humpty Dumpty of the Looking Glass.  In each book, time comes first, the Caterpillar and White Queen, followed by relations, the Duchess and Humpty Dumpty.  In Wonderland, space appears as the Cheshire Cat, who is in the house of the Duchess, though he speaks about space and position to Alice after she experiences the Duchess’ poor relations with others.  In the Looking Glass, space appears as the Sheep, who is also time, the White Queen, before Alice meets Humpty Dumpty and his poor relations with her. 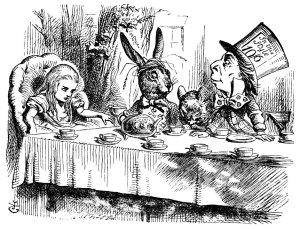 The seventh chapter of each work is about quality, with the Tea Party and the Lion & Unicorn, and the Mad Hatter and Hare appear in both.  The eighth chapter is about quantity, with the playing cards of the Queen of Hearts and inventions of the White Knight.  The remaining chapters of each work are about substance, with the insubstantial lies of the Mock Turtle leading to the King of Heart’s Trial over tarts, and the test about sums leading to the Queens’ Banquet.

The four royal court figures of both books, the White Rabbit, Duchess, Queen of Hearts and King of Hearts of Wonderland and the Red Queen, Red King, White Queen and White King of the Looking Glass, correspond with Aristotle’s four types of statements and four “perfect” forms of the syllogism, found in Aristotle’s On Interpretation and Prior Analytics: In Wonderland, the White Rabbit is particular and positive, accepting some and some, worried about being late for others and accepting Alice into his house as a servant, the Duchess is particular and negative, rejecting some and some-not with punishments and morals in her house, the Queen of Hearts is absolute and negative, subtracting and excluding anyone entirely for any mistake in her garden, and the King of Hearts is absolute and positive, accepting any and all testimony as equally and entirely valid for consideration in his court. 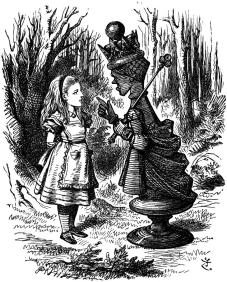 In the Looking Glass, the Red Queen is absolute and negative, like the Queen of Hearts of Wonderland, who tells Alice all ways are hers, thus none are Alice’s in her garden.  The Red King is particular and negative, who dreams of Alice but in his own dream, out in the woods.  The White Queen is absolute and positive, who believes impossible things before breakfast, and the White King is particular and positive, accepting the somewhat steady agreement of the battling Lion and Unicorn.  In Wonderland, the royalty all rule indoor spaces, but in the Looking Glass, they are all outside in the open.

There is much that makes sense with this interpretation, and I believe it makes much sense of details that have puzzled many  in the books. I got the idea by studying the text for many years in the light of Wittgenstein, Poe and others, and then a recent strong feeling that the Caterpillar stands for time led to another feeling that the Cheshire Cat stands for space, which led to looking up Aristotle’s list of the ten categories and seeing that relations, space and time are much like the Duchess, Cat and Caterpillar of Wonderland, such that Aristotle’s order seems inverted by Carroll, as if seen in a looking glass.