Ibn Rushd, known Latinized to Europeans as Averroes (1126-1198), lived, studied and taught in Cordoba, Spain, like Maimonides.  He wrote commentaries on all of Aristotle’s works, and like Avicenna was central for Europe’s understanding of Aristotle.  Against the Sufi mystic al-Ghazali’s book The Incoherence of the Philosophers, Averroes wrote The Incoherence of the Incoherence, arguing against skepticism for the pursuit of universal knowledge.  For Averroes, the grasp of the cognitive is the fruit, the real meaning, and the sensibles are the external rinds, like the tough outside of a cantaloupe, the wolf-song melon, also known as a Persian melon, which came from South Asia to Europe by way of the Italian province known by the same name.

While Avicenna followed much of Farabi’s Neoplatonic Aristotelianism, Averroes, the third of the great three Islamic philosophers, was quite opposed to the first two, particularly their rather Mutazilite idea that God is absolutely necessary, and acts necessarily, without freedom, but the world is contingent and possible, dependent on God as necessary and as its source.  Averroes argued that the world, as some Islamic theologians do argue, much like Calvinist Christians, that God is free to act as God pleases, but the world is absolutely deterministic, as God knows and causes everything to happen before it happens, such that if something happens in the future, as Muslims say, it will happen inshallah, if God wills it, never making absolute human judgements about the future, not because God doesn’t already know what’s going to happen, but because we human beings can’t possibly know what is fated to come.  The saying works either way.

Averroes rejects Avicenna’s faculty of estimation in animals, saying sensation and imagination in animals is all that is needed.  He substitutes the internal sense cogitation for estimation, and denies the distinction between the two types of imagination, giving him four.  For Avicenna, imagination can grasp objects that are nonexistent, but estimation grasps invisible intentions that do exist, and are particular things, not universal types, such as the sheep feeling that wolf is angry over there, not that anger is generally in wolves overall.

Averroes argues that colors and forms exist in a nobler way in the soul than in the object, oddly like abstract expressionists say in modern art, noting that an object cannot be black and white in the same way at once, but the eye can see black and white at the same time, admitting more with mind in experience than the material can admit in the object.  While a small object cannot fit in a larger one, the eye can contain the whole horizon, as much as our senses can admit, even though the eye is a tiny sphere, which shows us the power of the mind and soul in the eye. 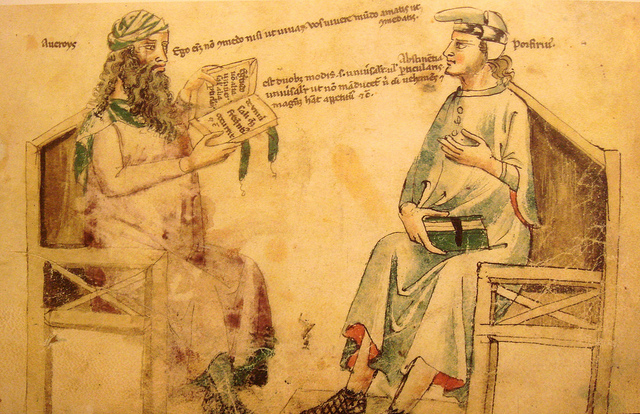 Many scholars did not like the formalities of studying logic, such as Iben al-Salah (d. 1245), who argued that no one needs Aristotelian logic, as God gave everyone common sense, which is clearly more useful.  The juror Ign Tamiyya (d. 1328) argued that syllogisms are perfectly true, but absurdly useless and needlessly difficult. It was only with Sir Francis Bacon in the 1600s declaring Aristotle’s syllogisms, his forms of reasoning, as too rigid for the progress of the sciences that Europe turned from Averroism.