The Hidden Accomplice in the Murder of Marie Roget 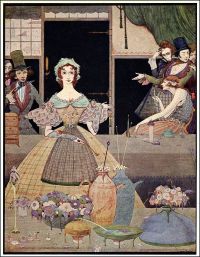 Poe’s sequel to the Rue Morgue, The Murder of Marie Roget is based on the unsolved murder of Mary Rogers, a young woman who worked at a cigar store in New York City who may or may not have known Poe and sold him cigars.  A particular gentlemen, the news noted after her death, had paid Mary much attention at the store three years earlier and then left town, causing Mary to wander off and consider suicide.  One paper noted that, just like a cigar, the romance had gone up in smoke. These are Poe’s competitors at rhetoric. An opinion piece argued girls shouldn’t work at cigar or candy stores, where they interact with men.  Another paper insisted that a naval officer, a sailor, had seduced Mary and kept her in Hoboken for two weeks, until abandoning her rather than marrying her as promised. Another paper said that the stories about Mary running off with anyone were phony, and a reporter fond of Mary had been severely beaten by other admirers after visiting her store.

On June 25th, 1841, Mary told Daniel Payne, a boarder at Mary’s house who happened to be shaving at the time, that she was going to her aunt’s house to take her aunt’s children to Sunday Church.  Daniel agreed to meet her later, but after a thunderstorm Mary didn’t show and he returned home, as she had stayed with her aunt before in similar weather, but after Mary was not back yet after Daniel returned home from his job at the cork factory, he took a coach to her aunt’s and was horrified to hear that Mary never got there.  Daniel had been courting Mary, as many were apparently, including Alfred Crommeline, who four days later while searching for Mary saw a crowd down by the river. A body of a young woman was dragged out of the water, and Alfred recognized the clothing, called the cops, who called the coroner, who pronounced her dead by violent means, strangled after sexual abuse.  The coroner reported she had been bound with “sailor’s knots, not ladies’ knots,” gagged, and assaulted by several assailants.

The papers gave the case full coverage for six weeks, but the case was never solved.  Many used the event to lecture on morality, and others to sensationalize theories that went nowhere.  While the theory that a gang had attacked Mary continued to hold sway, some questioned whether or not the doctor could tell if Mary had been attacked or had an abortion instead that may or may not have gone wrong.  The doctor continued to insist that Mary had been a woman of virtue. A five hundred dollar reward for information leading to solving the case was offered by citizens and the police, but even when it was raised several times over it didn’t bring results.

Then, strangely, some of Mary’s clothes and a monogrammed handkerchief were found by Mrs. Frederica Loss in a thicket near her roadhouse by the river where Mary was found.  Loss says Mary arrived with a dark male stranger about 4 in the afternoon on the day she disappeared, drank some lemonade and left on the stranger’s arm smiling. Loss, who had sent one of her sons to deliver a bull down the road, heard screaming just after dark at 9, which her other son down in the cellar heard as well.  She said she feared her son had been gored by the bull and rushed down the road after him. She heard something like a struggle nearby, and then silence. There had been gangs roughhousing in the afternoon along the bank that day, and her boys found the clothes in the thicket a month afterwards while playing, which is when she realized that the young woman had been Mary.

The papers continued to debate whether Mary’s lover or a gang had strangled her or mistreated her. Poe’s story, which closely follows the exact events of the case and sets them in Paris with Marie Roget, which would have fooled no one at all in New York who read any of the papers.  Much of Poe’s story takes place in newspaper accounts that the narrator and Dupin read, just as Poe would have followed the case of Mary in the papers himself.  Dupin concludes that the scene of the crime makes no sense if a gang committed the crime, but does if a single sailor, Mary’s dark stranger, had brought her to the thicket, and then strangled her before or after passion or Mary pleading for marriage.  Dupin says the sailor dumped Mary’s body after leaving everything behind in the thicket, and in Poe’s story the sailor turns himself in and confesses. Poe wrote to an editor that his story had disproved the gang theory, and “indicated the assassin.” Unfortunately Loss confessed on her deathbed several months after Poe first published parts of his story that Mary had been the victim of a botched abortion, which was criminal at the time, which is likely why one of her sons in the cellar had heard the screams, and the other had been sent down the road.

Poe changed several details in the story in the final version in the collected tales to suggest that Marie had already had one abortion, disappearing for awhile years ago, much as Mary wandered off suicidal, and suggests that Loss, Madame Deluc in his retelling, was an accomplice, another fancy word with several syllables from French.  Dupin points out that children would play in the thicket and find the clothes much sooner than a month later, and that clothes do not take a month to mildew when left outside, which suggests Deluc in the story holds on to the clothes, whether or not she was concealing an abortion or a place for lovers’ trysts, and then she left the clothes out for a bit and brought them to the cops when she feared she would be revealed or was threatened by the sailor to help him conceal his crime.  Poe had already committed himself to the idea that the sailor had strangled Marie, but either way Deluc, Loss in real life, had to have a hand in the crime or concealment.

In 1891, 42 years after Poe’s death, John Anderson, the owner of the cigar shop where the original Mary Rogers worked before her tragic death, left a will that was contested in court, and it was alleged that Poe was paid five thousand dollars to write the story to divert suspicion from Anderson himself.  The character in the story is Le Blanc, the white, like Le Bon of the first story, the good, but the claim is far-fetched.  Poe almost came to blows at a party in 1844 when someone suggested that Anderson, Poe’s friend, was using the death to help his business.  Perhaps it was suggested that Poe was profiting himself from it as well.