For this lecture, read Aristotle’s Politics, Book I, Chapters I through VI.

Plato’s student and the tutor of Alexander the Great and Ptolemy, Aristotle (384 – 322 BCE) is one of the most famous and influential of Greek philosophers along with Socrates and Plato.  His father was the personal physician of King Amyntas of Macedon.  Later, Aristotle would become the tutor and adviser to Alexander the Great, himself a Macedonian monarch.  When he was old enough, Aristotle traveled to Athens to join Plato’s Academy and studied with Plato for twenty years until Plato’s death.

Aristotle founded his school in Athens in 335 BCE, holding meetings of his students at a public gymnasium named the Lyceum after a form of Apollo as a wolf god.  The Lyceum had seen earlier philosophers give public talks, including Socrates and Plato, and it continued to be the meeting place for followers of Aristotle until Athens was sacked by the Romans 250 years later.  The followers of Aristotle became known as the Peripatetics, the “Walk-about-ers”, as Aristotle enjoyed walking as he lectured, taught and answered questions.  In the mornings, he would walk with a select number of advanced students in detailed, advanced seminars, and then in the evening give general talks open to any who would gather.  After Alexander died, Aristotle feared being killed by the Athenians as he was not only a barbarian foreigner and a Macedonian but the tutor of Alexander, who was not loved by the Athenians.  After he was accused publicly of impiety towards the gods, showing little in Athens had changed since the death of Socrates, Aristotle left Athens saying he would not allow the Athenians “to sin against philosophy twice”, recalling the death of Socrates due to similar charges. 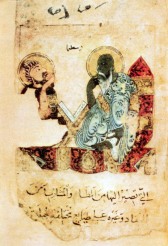 Aristotle, like his teacher Plato “the broad”, wrote on a great number of subjects.  Many of his writings are now lost, and scholars debate which of his works are his own or the notes of his students.  Diogenes Laertius wrote in Roman times about the work of Aristotle, though none of the works he mentions are known today.  It is also possible that many of the texts we have are lecture notes, either Aristotle’s or his students’, and may not have been intended to stand as texts in their own right.  Aristotle was primarily interested in biology and speciation, but his works on the soul, logic, ethics and politics became more important than his works on the animal kingdom. He was a central influence on the origins of Christianity, Islamic thought and European thought in the middle ages. 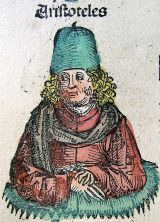 All things are aimed at particular purposes, at what they find to be good, and a city, which Aristotle equates with a society and political system in city-state times, is aimed at the overall good of everyone involved.  While Americans hear the word ‘constitution’ and think of a famous piece of paper, Aristotle uses it to mean the form of a state or political system, just as the American piece of famous paper outlines the form of the American political system.  Aristotle says that there are many different constitutions of states, such as those ruled by one or those ruled by many, and we must consider the basic elements of a city to understand these different constitutions, much as Plato, Aristotle’s teacher, did in the Republic.

First, there is the necessary coexistence of male and female for propagation of the species, natural to plants and animals, including humanity, for leaving behind smaller versions of themselves.  Second, immediately following this, there is the necessary coexistence of those with rational, reasoning minds who are superior and should govern others and those who are merely ‘corporeal’ and physical, who are inferior and should serve as slaves.  While someone could begin with the coexistence of male and female to argue for equality in balance, Aristotle seeks balance between superiors and inferiors such that superiors are not too tyrannical and authoritarian and inferiors are not too rebellious and democratic such that “the different state of master and slave is equally advantageous to both”.  He says that women are not simply slaves, but have a particular natural purpose that fulfills them, as do slaves, and that people should do one thing rather than many, as Plato argues in his Republic.  However, amongst barbarians, whom Aristotle divides from the Greeks by name, there are none with rational minds and so neither women nor men are fit to rule each other.  It is unclear whether Aristotle excludes Egyptians and Persians from the ‘barbarians’, or if he includes all non-Greeks in this group.  Ironically, Aristotle himself was considered by many in Athens to be a barbarian himself, as he was from the north and associated with Macedonians, which is why he fled Athens when his student Alexander died.

Families are governed by elders, with the oldest male ruling the others, and so cities have typically been governed by kings.  It is the common opinion that the gods are ruled in the same way, with Zeus as their king.  Hume, the Scottish skeptic, said that people typically think that God is a king with a beard based in their common experiences of being ruled by kings with beards.  First and foremost, the city allows families and villages of families to collect together and live, and secondly it allows them to be happy, much like the coexistence of male and female.

Aristotle famously says that humanity is by nature a political animal, and that those who live with the birds and beasts will “be of a quarrelsome disposition”, much as Confucius says about Daoist hermits and others who retreat from society into nature.  Aristotle says that humans alone can talk, which shows that we are the most social of all the animals.  We alone can think and say that things are good or bad, just or unjust, pleasurable or painful.  If someone is incapable of living in a society with others, they are either a beast or a god, to weak or powerful to be human.  Aristotle says that with politics, justice and laws humanity is the most excellent animal, but without them we are the worst, similar to Xunzi and Hobbes.  Mencius would disagree, and probably Confucius would as well.  As the most enabled animal, we are potentially both the best and the worst.

For Aristotle, domination and submission are absolutely essential and necessary for a society to stand and flourish, providing life and happiness.  The basic elements of society are the three relationships of master and slave, husband and wife, and parent and child.  Aristotle says that some have argued it is human law and custom that causes some to rule over others, and that this is not in accord with human nature, but Aristotle argues that domination and submission are the natural and proper expression of human nature, even as he argues that politics is the natural expression of the good of everyone overall.  Just as living things use dead objects as instruments, reasoning masters use unreasoning slaves as “animated instruments”, objects that happen to be alive.  Today, when we say we “objectify” someone, we use them for our purposes without acknowledging their interests.  Aristotle reasons, as a master, that if musical instruments could play themselves or slaves master themselves, there would be no need for musicians or masters.

Just as the purpose of the human mind, our highest organ and the rightful ruler of the body, is reason, the purpose of society is for the cultivation of wisdom in philosophers.  Following much of Plato’s plan set out in the Republic, Aristotle believes that the purpose of the city is ultimately philosophy, as it is only this that can preserve and order the whole.  Just as the intellect should be pursued because it is the best and highest part, the good itself should be pursued simply in itself and for no other purpose.  Aristotle does believe that the good and wise individual will flourish and be happy, but this is secondary to serving one’s purpose.

On property, Aristotle differs from Plato and his conception of an ideal city.  While Plato argued that the police and philosophers should own nothing in common, sharing even their children and families, Aristotle, in accord with the doctrine of the mean, called for a balance of public and private property.  He argues that Plato was overly confident in people’s ability to be similar, and thus ignored the great differences between individuals and families.  Very similar to the Confucians such as Mencius arguing against the Moists and universal love, Aristotle argues that if we shared everything and everyone in common people would not care about anything in particular and this would lead to the ruin of the state, and that we see people naturally caring about their own family and possessions than they do about things shared in common.  Aristotle argues that generosity and sharing should be voluntary and not forced, and thus Plato is wrong to suggest the guardians share everything by law. 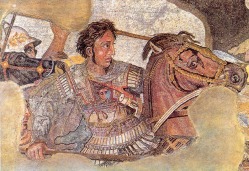 About governments, Aristotle says there are three forms, monarchy, aristocracy and republic.  A corrupt monarchy is a tyranny, a corrupt aristocracy is an oligarchy, and a corrupt republic is a democracy.  For Aristotle the best form of government is monarchy (consider that he tutored Alexander, teaching him how to rule an empire), followed by aristocracy, then republic, and then followed by democracy, oligarchy, and lastly tyranny.  This creates a diamond like shape, with rule of a single individual or by fewest is best when it is good and worst when it is bad.  Because good kings are rare, again seeking a balance in the middle, Aristotle argues that a republic is safest, but he clearly does not want a democracy with voting for everyone.  As Aristotle is ethnocentric and not an egalitarian, he says that different peoples are suited for different forms of government.  The Greeks have both the spirit of the Europeans, who are beast-like people, naturally suited for slavery, and the mind of the Asians, so they are suited for ruling themselves in a republic.

Aristotle argues that money should be excluded from politics, a fine idea except that this also means people who do not have sufficient money such that they are not worried about acquiring more, those with the leisure to do philosophy and science, are the best for politics, and common people such as craftsmen and farmers must be excluded or they will put their interest in money above justice.  Aristotle does not consider it wise to allow working people to become citizens, vote or serve on juries.