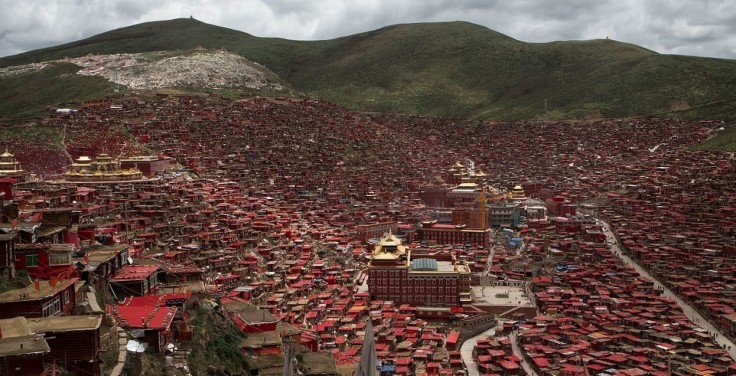 Tibetan culture was radically transformed by the arrival of Buddhism, from India, Afghanistan and China shortly after 600 CE.  Mahayana Buddhism became Tibet’s official religion, as well as its social structure, art and architecture as well, mixing with local, native shamanic traditions which also survive in Tibet today.  Unbeknownst to many, Afghanistan was once one of the major Buddhist centers of the world, which is sadly why there were huge Buddhist statues that were blown up by Taliban affiliated Islamic extremists, the sort we trained to fight against the Soviet Union in the 80s. 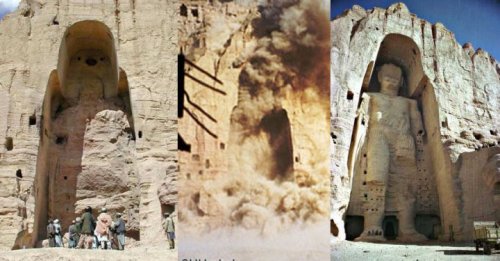 The characters of Tibetan writing were created to translate Buddhist texts into the Tibetan language.  Many Mahayana texts, including Nagarjuna’s, survived in Tibet as Islam took over much of India.  To the right are the characters for Om mani padme hum, a very popular mantra (chant) used for meditation that means Jewel-Lotus (mani padme), another name for the bodhisattva Avalokiteshvara, surrounded by the sound Om in front and behind, a sound associated with peace, tranquility and the vastness of the cosmos.  The mantra is often chanted repeatedly without a break between the first and last Om, such that it cycles as an unbroken loop of sound.  Much Tibetan jewellery bears this mantra.  Here is twelve hours of it:

Tibetans claim that Buddhism arrived centuries earlier, when the Buddha himself and other Buddhas came to Tibet to teach, over a thousand years before modern scholars say Buddhism arrived.  One amusing story has Buddha asking about Tibet before journeying there, and he is told that the Tibetans are the nicest people ever.  Buddha worries that if the Tibetans are so extraordinarily nice, he will lose his finely tuned ability to deal with jerks, so he takes along a terrible tea servant who constantly mocks the Buddha and plays tricks on him. 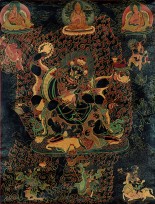 Buddhism developed into many competing schools of thought in Tibet as it had in India and did in China, Japan and throughout Asia.  Tibetan Buddhism is known for its elaborate rituals, tantric practices, meditation exercises, and systems of symbols, deities and demons.  Tibetans believe that many demons were converted to Buddhism by great teachers, much as Ravana became a devotee of Shiva in the Ramayana, and so much artwork features demons who are protectors of Buddhism, its teachings and the community.  Gazing at these demons, and similarly at skull bowls of blood, decapitated heads and other horrifying images is thought to purify the self of obstructions and identify with the lowest and most horrifying levels of the self and mind.

Soon after Tibetan Buddhism was established, there was an influx of Chinese Chan (Zen, in the Japanese).  Controversy arose between those who supported the elaborate Buddhist practices and those, including many nobles, who supported the simplicity of Zen, which taught that enlightenment could be achieved suddenly and without elaborate ceremonies and practices.  Zen Buddhists do traditionally believe in deities and practice ceremonies, but meditation and enlightenment became the primary and simple focus.

Tibet was more influenced by India than China, in part due to a legendary debate in 794 CE between Kamalashila, a monk from India, and Moheyan, a monk from China, at the Samye monastery in Tibet, the first Buddhist monastery built in Tibet only fifteen years earlier in 779 CE.  Kamalashila, who represented Indian Mahayana Buddhism and argued for gradual enlightenment, defeated Moheyan, who represented Chinese Chan (Zen in Japanese) Buddhism and argued for sudden enlightenment, and this affected the entire course of Buddhism in Tibet.  This remained an issue between the two large schools of Zen.  Several Chinese sources say that it was Moheyan who won the debate, but he was forced to leave the country.

As mentioned last time, legend has it that after a debate in 794 CE between Kamalashila, a monk from India, and Moheyan, a monk from China, at the Samye monastery in Tibet, judged by the Tibetan King.  The Chinese and their school were expelled from the country and the King officially pronounced the Indian Nagarjuna to be affixed as patriarch of Tibetan Buddhism in opposition to Bodhidharma, the patriarch of Zen who is believed to have traveled from India to China, bringing Zen with him. Interestingly, here in the Bay Area the Beatniks loved Zen and its stark black and white imagery, while Hippies, many who did embrace Zen, were drawn to the colorful and elaborately beautiful art and practices of Tibetan Buddhism and Indian Hinduism. 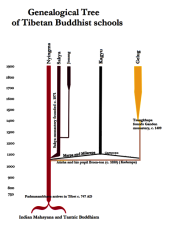 Between 1200 and 1500, many schools of Tibetan Buddhism arose in debate with each other over the vast store of Indian texts which survived only in Tibet.  Education in Tibetan Buddhism largely consists of the memorization of texts and debate with others about various understandings of the texts and their teachings.  Good debaters would achieve fame and following, much like athletes and celebrities today.  Many debates revolved around the controversial concepts of emptiness and buddha-nature.  As untranslated texts were being translated, schools based on the new texts (Gsar-ma) entered into debate with older schools based on the earlier translated and established texts (Rnin-ma).

According to modern scholarship, some of both the old and the new texts were never original Indian texts at all, but were written in Tibet and “discovered” by various figures at various times.  Similar “discoveries” occurred in China and Japan with the development of Buddhism there.  New schools would arise, and a member would “discover” a text hidden in a log or a cave that just happened to support their doctrines and argue against the doctrines of competing schools.  Tibetans view Buddhism as evolving in India into the final form of Nagarjuna’s Madhyamaka school, and then each Tibetan school views this tradition as evolving in Tibet into their own position.  This is very similar to Zen, each school viewing itself as the final evolution.  As mentioned, this ‘final form’ takes drastically different forms in various places.

The Tibetan Book of the Dead (Bardo Thodol) has attracted a following in Europe and America, first among enthusiasts such as the Theosophists, then scholars such as the psychoanalyst Karl Jung, who noted the similarities with the Egyptian Book of the Dead in his search for the primordial archetypes of the common human psyche, and then later with Timothy Leary and hippies who viewed psychedelic experiences as a death and rebirth.  The text is to be read to the dying and then to the corpse in the days after death to help it be released from rebirth and achieve nirvana.  Again and again, the text implores the dead to embrace the clear light from above which appears bright and frightening to the ignorant, who prefer the dull light from below.  Embracing the clear light, which they are now ‘set face to face’ with, results in liberation, while running into the softer dim light means being reborn in the world of suffering and desire.

In the series of talks in 2010 already mentioned, the Dalai Lama spoke to an audience on the need for compassion and discipline across religious and secular lines, and then teaches from Nagarjuna’s central texts.  We have already discussed Nagarjuna, and his importance for Tibetan Buddhism as well as Mahayana Buddhism across North East Asia.  He says that the golden age of ancient Indian thought should be a model of how many religions and philosophies can coexist together.  He says that he believes that only Buddhism truly believes in anatman, the absence of a permanent self, but he will ask Jain leaders if Jains also hold this view at a Jain ceremony and series of dialogues he is going to attend in a month.  He also mentions that some Jains attend these conferences completely naked, and giggles for awhile about it.  He says that religions such as Christianity and Islam which believe in heaven do believe in a permanent self, but neither he nor they know what this is for sure.

Teaching from the Nagarjuna texts, he says that the true self has no self particular to itself at all, and that through study, critical reflection, and meditation, one can come to a greater and greater realization of this deepest level of reality.  He follows Nagarjuna who criticizes the Yogachara or Mind Only school for maintaining a duality between mental conceptions and mind, saying that form is emptiness, and emptiness is form.  Rather than ridding the mind of mental conceptions, we become not only the mental conceptions but the conceptions they oppose to realize mind. Realizing interdependence means maintaining distinctions while simultaneously overcoming them.  This is the true cleansing of realization.  Just as Buddha criticized Jains for trying to get rid of the self as a conception, Nagarjuna criticizes the Yogachara for trying to get rid of conception, including the self.  Negation of concepts is not their annihilation, but accepting the things that they negate.  Overcoming the self is not annihilation of the self, but acceptance of the other as the self through compassion.

On a political note, Tibet is currently occupied and claimed by China.  While the Tibetan nobility did not treat the common people very well, a major factor that allowed the Communists to invade and take over, the Tibetans begged the Americans to help them and arm them against China, but American CIA agents evaluated the situation and did not see much value in protecting the vast Tibetan desert lands, allowing Tibet to fall to China.  Two years later, the world’s largest deposit of uranium was discovered in the Tibetan and Khazakstani mountains, putting this in Soviet Russian and Communist Chinese control.  If those deposits had been discovered two years earlier, it is likely that America would have protected the Tibetans and Tibet would be free today.