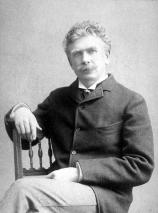 Ambrose Bierce wrote bitterly about the Civil War and the corruption on both sides, Union and Confederacy, arguing that the war was not about noble ideals but the power of the military and the profits of corporations.  He moved to San Francisco in 1866,  wrote his famous Devil’s Dictionary, which was originally called the Cynic’s Word Book in 1906 when it was first published, and then disappeared in Mexico seeking to join the revolution in 1914. He had a brilliant gift with using humor to point out the ways we are all selfish and ignorant, attacking the politicians, the military, the rich, slavery, and American society.  Some Entries from his Devil’s Dictionary include:

Absurdity: A statement or belief manifestly inconsistent with one’s own opinion.

Academe: An ancient school where morality and philosophy were taught.

Academy: A modern school where football is taught.

Admiration: Our polite recognition of another’s resemblance to ourselves.

Anoint.: To grease a king or other great functionary already sufficiently slippery.

Beauty:The power by which a woman charms a lover and terrifies a husband.

Birth: The first and direst of all disasters.

Bore: A person who talks when you want them to listen.

Brain: an apparatus with which we think we think.

Christian: One who thinks the Bible is admirably suited to the needs of his neighbor.

Circus: A place where animals are permitted to see people acting like fools.

Conservative: A statesman who is enamored of existing evils, as distinguished from a Liberal, who wishes to replace them with others.

Corporation: An ingenious device for obtaining profit without individual responsibility.

Debt: An ingenious substitute for the chain and whip of the slave-driver.

Dictionary: A device for cramping the growth of a language and making it inelastic.

Diplomacy: The patriotic act of lying for one’s country.

Disobedience: The silver lining to servitude.

Distance: The one thing the rich are willing to let the poor keep.

Duty: That which sternly impels us in the direction of profit, along the line of desire.

Edible: Good to eat, and wholesome to digest, as a worm to a toad, a toad to a snake, a snake to a pig, a pig to a man, and a man to a worm.

Education: That which discloses to the wise and disguises from the fool their lack of understanding.

Freedom: A political condition that every nation supposes itself to enjoy in virtual monopoly.

Future: The time when our friends are true and our happiness is assured.

Egotist: a person of low taste, more interested in himself than in me.

Hand: An instrument worn at the end of an arm and commonly thrust into someone’s pocket.

Hashish: There is no definition of this word.  No one knows what this word means.

History: An account, mostly false, of events, mostly unimportant, which are brought about by rulers, mostly knaves, and soldiers, mostly fools.

Impartial: Unable to perceive personal advantage from either side of a controversy.

Justice: That which the state sells the citizen in exchange for allegiance and taxes.

Lecturer: One with his hand in your pocket, his tongue in your ear and his faith in your patience.

Logic: The art of thinking and reasoning in strict accordance with the limitations and incapacities of the human misunderstanding.

Ocean: A body of water occupying two thirds of a world made for man, who has no gills.

Past: That part of Eternity with which we have a slight and regrettable acquaintance.

Patriot: The dupe of statesmen and the tool of conquerors.

Peace: A period of cheating between two periods of fighting.

Positive: Mistaken at the top of one’s voice.

Radicalism: The conservatism of tomorrow injected into the affairs of today.

Rational: Devoid of all delusions save those of observation, experience and reflection.

Reality: The dream of a mad philosopher.

Reason: To weigh probabilities in the scales of desire.

Responsibility: A detachable burden easily shifted to the shoulders of God, Fate, Fortune, Luck or one’s neighbor.  In the days of astrology it was customary to unload it upon a star.

Revolution: An abrupt change in the form of misrule.  In American history, that whereby the welfare and happiness of the people were advanced a full half-inch.

Rum: A fiery liquor that produces madness in total abstainers.

Self-evident: Evident to one’s self and to nobody else.

Selfish: Devoid of consideration for the selfishness of others.

Suffrage: The right to vote for the man of another man’s choice.

Trial: A formal inquiry designed to prove the blameless character of judges, lawyers and jurors.

Truth: An ingenious compound of desirability and appearance.

Understanding: A cerebral secretion that enables on having it to know a house from a horse by the roof on the house.  Its nature and laws have been exhaustively expounded by Locke, who rode a house, and Kant, who lived in a horse.