Aristotle argued in his Categories that there are ten sorts of things, substance, quantity, quality, relatives, place, time, position, state, action and passion.  In reverse order, this charts the order of events and characters in Lewis Carroll’s Wonderland.  I have often wondered if the Caterpillar and Cheshire Cat stand for inclusive and exclusive OR, but also as time and space.  Time includes many things together all at once, while space is exclusive, such that nothing can be exactly in the same space as anything else, much like the dueling perspectives the Cat mocks as oppositely insane.  Now I see that Carroll was working from inclusive passion, being acted-upon, to exclusive substance, things that are identical to themselves and nothing else.

First, the White Rabbit is passion, who acts on Alice, moved by her passion without thinking into chasing after the rabbit.

Second, the mouse is action, after the banquet hall, where Alice can’t act but is moved by her tears, where Alice acts on the mouse who flees her passionate talk of her cat, acted-upon by Alice, but negatively, opposite the way the White Rabbit acted-upon her.

Third, there is the bird’s caucus race, which mocks politics, also known as the state.

Fourth, the White Rabbit mistakes Alice for his servant, and Alice takes on the servant’s position, ultimately finding herself in quite the imposition, filling the White Rabbit’s entire house.

Fifth, the Caterpillar is time, who takes away the certainty of all things, and includes all changes and possibilities as indeterminate. 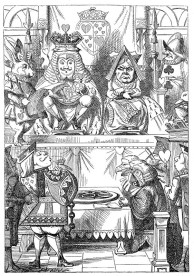 Sixth, the Cheshire cat is space, who shows Alice conflicting positions, each exclusive and opposed to the other.

Seventh, the Duchess and baby are relatives or relations, and Alice moves from taking the position outside the pigeon defending the egg in her next, to the cat who watches the Duchess beat her baby, to Alice dropping the baby when it turns into a pig, as the cat thought it would.

Eighth, the Mad Tea Party is quality, with the Hatter and Hare insane, of bad mind, and the Hare insisting he used the best butter to fix the pocket watch, which is terrible.

Ninth, the Queen of Heart’s garden is quantity, with the two, five and seven cards forming an addition problem and the Queen threatening everyone with subtraction.

Tenth and finally, the King of Heart’s trial is substance, or lack thereof, just as the Tea Party lacked quality, with the tarts as a substance stolen and returned, the jury and king incapable of coming to substantive, proof-worthy judgements, and Alice declaring everything to be an empty pack of cards, devoid of substance and meaning.