Alice, Aristotle’s Syllogisms & Boole’s AND, OR & NOT

I have been working on Lewis Carroll’s Alice in Wonderland and Through the Looking Glass for many years now to find the logical and philosophical forms hiding inside it, and as I have been teaching logic this semester I have used the class as an excuse to go over Aristotle, Boole and Carroll’s work carefully.  In the process, I have found many Aristotelian and Boolean forms that are structural to both works that I have never seen before.

Aristotle’s four “perfect” syllogisms and Boole’s inclusive and exclusive operations of AND, OR and NOT, gathering and dividing as John Stuart Mill would say, form the positions and plot of both Alice books.  Carroll was studying the logic of Aristotle, Mill and Boole as he wrote both of Alice’s adventures, visually presenting logic as characters, but also as emotions, as inclusive and exclusive feelings that operate in our thoughts and our world together.  Carroll was trying to show us that syllogisms and logical operations are series of emotions, of feelings that gather and divide things in sequences as the underlying structure of thought with the underlying structure of his stories about Alice. 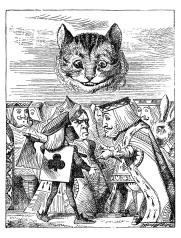 In the first book of Wonderland, Alice works her way from an inclusive AND, the White Rabbit, past the inclusive OR of the caterpillar, the exclusive OR of the Cheshire Cat, to the NOT of the Queen of Hearts, who chops off heads.  The various symbols for NOT Boole and other logicians use look a bit like an ax next to a capital letter, a symbol for a group much like a regal head who stands for the common people. Alice says it is all a pack of cards, meaningless manipulation of symbols and pieces regardless of meaning, and disrupts her imaginary dream.

The White Rabbit is like an addition problem, an AND, Alice and her older sister, inclusive of different elements, the two sisters, and exclusive, specialized and late to a specific event at a precise time.  This makes the White Rabbit an absurdly rational animal, as Aristotle would say, both man and beast.  Alice, bored with her sister reading to herself, charges after the White Rabbit down the rabbit hole, with no thought as to how she would get out again, like a wildly inclusive child, mirroring the absurdly inclusive combination of a rabbit with a waistcoat, and unlike her sister, who is carefully considering a specialized text.  Alice dreams she follows the absurdly complex White Rabbit as she can’t follow her sister in reading a boring specialized text that gathers a very narrow sort of element. A child needs emotions, pictures, words and many things to stay interested in a story. 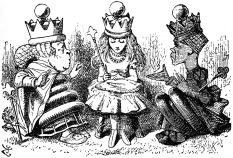 In the second book of the Looking Glass, Alice works her way from the Red Queen, another NOT like the red Queen of Hearts, past the White Queen, a childlike inclusive AND, timid like the White Rabbit, to the end of the board where Alice is the OR, who must inclusively and exclusively choose between inclusive AND, the White Queen on her right, and exclusive NOT, the Red Queen on her left.  The Queens test Alice and find she can’t inclusively add or exclusively subtract things the ways they ask her to, they take her to a banquet where food turns into people and people into food, and Alice hates it and turns the table over, upsetting her second dream. Wonderland works from childlike AND past OR to adult NOT, from inclusion to exclusion, and the Looking Glass works from adult NOT past childlike AND to bring the childlike-adult balance of OR, both inclusive and exclusive. 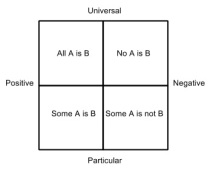 The four royal pieces of the Looking Glass world, the Red Queen, Red King, White Queen and White King, are the four corners of Aristotle’s Square of Opposition, a visual presentation of logic popular in Europe for centuries.  The White Queen, inclusively open like a child, is the universal positive (All, All, All), the Red Queen is the universal negative (All, None, None), the White King is the particular positive (Some, All, Some) and the Red King is the particular negative (Some, None, Some-Not).  In the end, Alice sits as an inclusive-exclusive OR between All and None, as the one who must decide for herself, with her powers of logic and reason, some and some not like an adult between the extremes, as Aristotle advises us in ethics.  There are countless examples of syllogistic reasoning in both texts, but here are central examples that show each royal chess piece as an Aristotelean corner.

BARBARA, the Positive Universal Syllogism:  If All A is B, and All B is C, then All A is C.  If all things are possible to think if you Shut your eyes and try very hard, as the White Queen suggests to Alice, and if all impossible things are things indeed, even if they, unicorns and we are all quite mental, then Alice can think six or more impossible things before breakfast if she shuts her eyes, imagines, and tries very hard, as the White Queen implies but doesn’t say directly, meaning what she doesn’t say syllogistically.  In Venn diagram form, if A is entirely B, and B is similarly C, then A must also be C.

If you are interested in more, please read my lecture on Logic, Lewis Carroll and Alice’s Adventures, which is very much under development and in progress at the moment, as can hopefully be understood.  It may turn out that all negativity is merely a playful, innocent kitten after all. 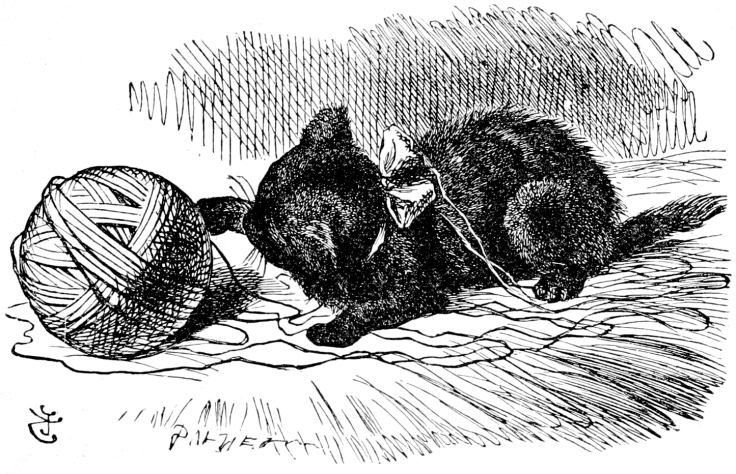