Some have said that the White Knight of Lewis Carroll’s Through The Looking Glass is Carroll himself.  If the order and characters of Wonderland and the Looking Glass fit the order of Aristotle’s ten categories, backwards, as I believe, this makes the White Knight, like the Queen of Hearts in Wonderland, quantity, and Carroll was, in his real life, a mathematics professor. 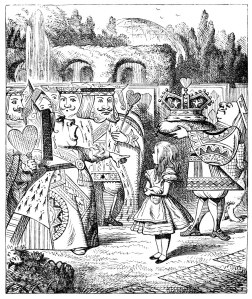 In the same way Carroll inverted several of the characters between the two books about Alice, as if in a mirror, the Queen of Hearts of Wonderland is quantity as too negative, exclusive and cruel, and the White Knight is quantity as too positive, inclusive and kind.  Alice can us the overly negative and overly positive example of both to steer a middle way between them, as Aristotle (as well as Buddha, Confucius, and many others) advises in ethics.  The White Knight guides Alice to the final square, where she is immediately given a test on sums, quantities, but as substances, Aristotle’s first and thus for Carroll final, category, which confuses Alice, who sits between the two positive and negative extremes.

The White Knight has a great quantity of ideas he produces, but he is a bit backwards and often upside down, much like the categories backwards.  Alice has to help him turn himself around, just as Carroll likely hoped the reader would see the inverted, mirror-image forms of logic he set in both books about Alice.  Aristotle would say, from the White Rabbit onward, Alice has been committing categorical errors (a fallacy found in Aristotle’s Sophistical Refutations) throughout her dreams.  She confused and dreamed her desire to be like her sister, her passion, to be an absurdly formal conjunction, the White Rabbit at the beginning of Wonderland, and at the end of the Looking Glass she dreams that quantity is a Knight, and then substance is a queen’s banquet, where the people turn out to be food and the food turns out to be people.