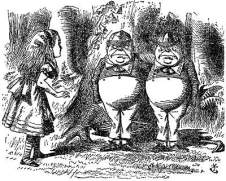 I have been developing the theory that Lewis Carroll used the logical forms of Aristotle, Boole and De Morgan throughout his Alice’s Adventures in Wonderland and Through the Looking Glass, and both books follow Aristotle’s logical categories in reverse order as the basis for the order of events in the plots of both books, more than any other form I’ve found, and more than any form anyone else seems to have found by far, which means the books are instructional illustrations of forms of logic that are memorable and teachable to both children and adults alike.

In his Categories, Aristotle starts with what he says is the highest category, substance, and ends with the lowest, passion, but Carroll starts both books with the lowest, passion, and works upwards to substance, opposite the order Aristotle discusses them in his Categories.  In Carroll’s mirror-image order, Aristotle’s ten categories are passion, action, state, position, time, place, relatives, quality, quantity, and substance.

1) Passion: In Wonderland, Alice follows the White Rabbit out of passion and delight, with no thought as to how she would get out of the rabbit hole.  In the Looking Glass, Alice scolds the Black Kitten out of passion and anger, threatening to leave it out in the snow which would surely kill it.  Summer outside becomes winter indoors, the White Rabbit becomes a black Kitten, and the passion of delight turns to anger, all mirrored inversions, like the inverted order of Aristotle’s categories in both books.

2) Action: In Wonderland, Alice upsets the Mouse by telling him about her cat, which causes him to act and swim away from her.  In the Looking Glass, Alice confuses the Flowers, which cause them to act and mock her, and the Red Queen drags Alice with her instead of fleeing from her like the Mouse, acting on her.  The illustration of the Mouse swimming from Alice and the Queen dragging Alice are remarkably similar, and Carroll was exacting about the images, asking for several to be painstakingly redone.  Acting away from Alice turns to acting towards Alice, the single Mouse becomes the many Flowers, and Alice forgetting the small size of the Mouse turns to Alice intimidated by the Flowers that tower over her, all inversions.

3) State: In Wonderland, Alice finds herself in a useless caucus race that goes round and round in circles which mocks politics.  In the Looking Glass, Alice finds herself on a train with people who read mass printed papers and repeat popular hasty conceptions, mocking the public escalation and industrialization of culture like a train gaining speed on a track, and Alice is told she is going the wrong way by the conductor, not merely her static inverted position, but her state in motion over time.  The race round and round going nowhere becomes a train gaining speed down the line of a track, and Alice goes from uselessly going nowhere to wrongly heading down the quickening public track.

I am posting a longer post today that clarifies both lists.