In the 1860s, Carroll had his most troubled and inspired years, producing both Alice books as he struggled with how to be a good person and great mathematician and logician, as well as his father’s death and the social isolation he felt at Oxford.  Just after completing Alice in Wonderland, Carroll moved into a suite of rooms in 1868 with the money from his popular book and he lived there the rest of his life. 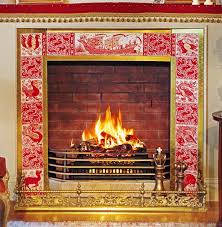 An excellent piece of evidence that Carroll was staging logical connectives as animal characters can be found in his personal fireplace.  Carroll had the logician Augustus De Morgan’s son, William De Morgan, design tiles for his fireplace, most with animals, several with animals attacking each other, and several pairs of tiles with the same animals in opposite emotional states.  When Carroll was later in charge of the common room in the building, he hired De Morgan’s son yet again to put similar tiles in the fireplace and other furnishings.

In Wonderland, many of the characters act as logical connectives, the sorts of nots, ands, and ors that Boole, De Morgan and Carroll worked on as logicians.  There are many puns about oars, like ors, that involve choices, and Alice in the end of her adventures sits between the White and Red Queens much as Boole’s or sits between his inclusive and and exclusive not.  The Caterpillar acts as a more inclusive but reclusive or, who gives Alice the power to change size and perspective.

The Cheshire Cat acts as an exclusive or, who sees and travels between exclusive perspectives opposed to each other, with dogs insane to cats and cats insane to dogs as he explains to Alice, which is why everyone is crazy to someone in Wonderland.  This is why we don’t see him entirely, most of the time, because just like the elephant to the blind men from India, each perspective, such as Alice’s, only sees part, not the whole.  This is how his head watches others argue about whether or not he can be beheaded, each side of the argument seeing a part of the truth, but not the whole situation, as he grins on them from above, seeing both sides fight.

The Caterpillar is like time, which includes more in our lives as it continues in series, but the Cat is like space, moves through it freely, and grins at the divisions it inevitably puts between people, even after the passage of time and experience.  Carroll is himself from Cheshire, and missed his family there at Oxford. We can see De Morgan’s theorems at work in the plot and characters, and particularly in the moves from the Caterpillar to the Cheshire Cat to the Mad Tea Party, with De Morgan’s second law working one way and then the other back again.