Is a catnap literal or metaphorical? 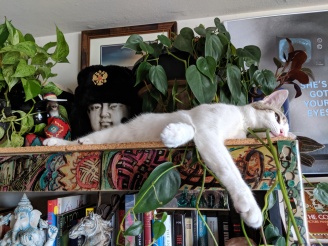 Let’s say that something is merely metaphorical if it is simply similar to something but not identical, as the Nyaya logicians of ancient India would say.  That means that if I act like a cat, but I am not a cat, it can be said, metaphorically, “Eric is a cat,” as I act like one, but it can’t be said literally AND truthfully that I am a cat, as said.  As Saussure the Swiss linguist could say, in French or German, the word “cat” doesn’t look like a cat or sound like a cat, nor does the word nap sound like a nap or look like one, but a catnap, a nap taken by a cat or me later, does look like a napping cat, whether or not I am a cat.  This means that when I, a human, take a catnap, I am literally taking a nap, but I am metaphorically taking a catnap.  Does this mean when I nap, “Eric is taking a catnap,” is both literally AND metaphorically true in different ways?  Can the two be complimentary, or are they exclusive?

If I am a cat, a catnap looks entirely like a cat taking a nap, and if I am not a cat, then it looks like a nap, which I am literally taking, but I am only like a cat, not actually or literally one, as said.  So: If I take a catnap with my cat, and you say, “They are taking a catnap together,” did you say something that was metaphorically true for me, but literally true for the cat, or is it both literal and metaphorical for both of us?  Does it feel metaphorical to say it about me, and feel literal to say it about the cat?  Does it feel or apply to me and the cat differently?  Does it depend how it feels to say it, or does it depend on how it is said, and to whom?  Nothing seems clear here, no matter how literally or carefully we speak.