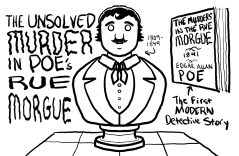 There is an unsolved murder hidden in Edgar Allan Poe’s Murders in the Rue Morgue, the first modern detective story, and Poe shows us how to solve it.  His detective Dupin, a model for Sherlock Holmes, uses feelings and words to solve cases with imagination.  If we follow his example, we can solve a case Poe left us long ago, hiding in plain sight. Read the story first if you prefer your murders unsolved.

The story begins in Borneo with two sailors capturing an orangutan.  One dies and the other takes the ape back to Paris. The ape escapes and tries to shave with a razor, then climbs in a window where a mother and daughter are counting valuables.  The ape tries to shave the mother, scares her, gets scared, cuts her throat, strangles the daughter, and escapes. The police chief sees two bodies, two bags of gold and no answers, so he locks up the bank clerk who helped the mother carry the gold home.  Our detective owes the bank clerk a favor, so he checks out the scene, takes out an ad, lures the sailor to his house with the promise of his ape, puts a gun on the table and forces the sailor to tell us his story.

The narrator oddly says at the start that a checkers game with four kings could show us brilliant moves.  In the story sailor catches ape, mother keeps daughter, chief locks up clerk, and detective captivates narrator, four pairs of pieces with one over the other.  Adventure leads to disaster and injustice leads to justice as the first pair kills the second and the third is redeemed by the fourth. The sailor’s ape kills the mother and daughter, and the chief jailing the clerk leads the detective to solve the case.  No one is punished as it seems there is no crime, but there is one unexplained end at the start: the second sailor.

The opening quote tells us Achilles hid unnamed among women, a sailor with a fatal flaw, and the name he took is not beyond all conjecture.  According to the final quote there is a master-stroke of brilliance in saying what isn’t and explaining what hasn’t been.  The second sailor isn’t, and we should explain why he hasn’t been since.  Dupin says the best solutions involve probability, and we can say with reasonable probability that the first sailor cut the throat of the second to keep the ape for himself.

The first sailor’s face is half-hidden by beard but he keeps a razor and says the ape watched him shave.  Poe borrowed a bit from the Voyage of the Potomac, a ship that took half a year to sail from New York to Indonesia.  If the sailor’s beard is longer than his voyage he lied and the ape didn’t watch him shave, but watched someone shave and someone cut a throat.  Poe also borrowed a bit from a folktale about a man who teaches an ape to shave and then cut his own throat.  The first sailor cut the throat of the second while the second was shaving, giving the first the opportunity, weapon and motive. 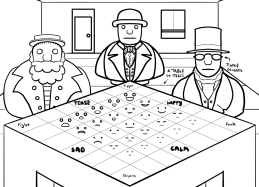 We are told to watch the tells of others to feel the greater game and most don’t, which is why most players don’t make brilliant moves.  Dupin tells us he has a window into others’ hearts, but doesn’t get a chance to watch tells to solve the case.  He reads clues and feels the ape’s motives at the crime scene but never meets him. He feels the dead mother and daughter didn’t kill themselves but can’t read them.  He feels for the clerk in prison but doesn’t visit him. Dupin feels that he hurt the chief’s pride, but after the case is closed.

The sailor is the only piece that shows us tells and he is easy to read twice.  He pauses on the stairs before ringing the doorbell and rises from the chair but remembers the gun, showing he is capable but also confused.  Dupin tells the sailor he is innocent which calms him, but the sailor hesitates a third and final time, the moment he thinks of his partner. Just as four pairs make the moves of the plot, four words make the most brilliant move of the story, after a brief pause.  After that the narrator summarizes the sailor’s story, stripping it of all further tells. 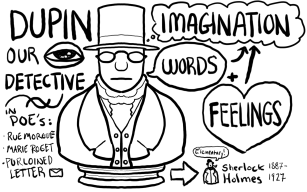 The first death in the story is like the first killing, with the throat cut and body left outside, and the final injustice is like the second killing, with youth strangled and stuck in a space.  Why doesn’t Dupin solve this hidden crime? Poe hoped we would, by following his words, feeling out the sailor and imagining what happened.  To help us even more, in his second detective story we discover a sailor has killed someone he loves.  Poe has duped us all with Dupin since, taking the secret to his grave after he invented the whodunnit.

There are many brilliant moves in Poe’s detective stories that show us his skills, using feelings and words to imagine his craft.  Feelings are often simple and absurd but also pivotal and profound, and Poe’s tales show us more about moves we make in life. Emotions may be the weakness of words, the Achilles’ heel hiding at the base of all arguments, but feelings are the strength of meaning itself, and we can hardly think without them.

A Companion to Poe Studies, by Eric W. Carlson, Greenwood 1996

3 thoughts on “The Unsolved Murder In Poe’s Rue Morgue”