Followers of the Way, you take the words that come out of the mouths of a bunch of old teachers to be a description of the true Way.  You think, ‘This is a most wonderful teacher and friend.  I have only the mind of a common mortal.  I would never dare try to fathom such greatness.’  Blind idiots!  You go through life with this kind of understanding, betraying your own two eyes, cringing and faltering like a donkey on an ice road, saying, ‘I would never dare speak ill of such a good friend.  I’d be afraid of making mouth karma!’

Followers of the Way, the really good friend is someone who dares to speak ill of the Buddha, speak ill of the patriarchs, pass judgement on anyone in the world, throw away the Buddhist scriptures, despise those little children, and in the midst of disagreement and agreement seek out the real person.  For the past twelve years I’ve looked for this thing called karma, but I’ve never found so much as a particle of it the size of a mustard seed. 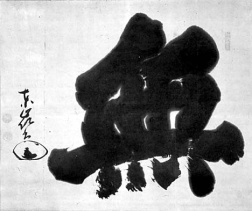 Those Chan masters who are as timid as a new bride are afraid they might be expelled from the monastery of deprived of their meal of rice, worrying and fretting, but from times past the real teachers, wherever they went, were never listened to and were always driven out.  That’s how you know they were sages of worth.  If everyone approves of you wherever you go, what use can you be?  Hence the saying, let the lion give one roar and the brains of foxes will all split open.