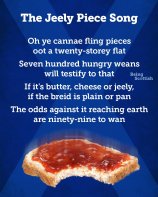 I am a quarter Scottish, and all of me is a fan of surreal humor, particularly jokes that help us deal with terrible problems.  I had never heard of the Jeely Piece song, but I found it watching a video called How Scottish Are You? that mentioned the song is a favorite, particularly of the struggling and poor people of Glasgow, Scottish Detroit.  The song was written about the hungry children in Glasgow highrise public housing by Adam McNaughton in 1967, and popularly sung by Matt McGinn, but the song isn’t on McGinn’s greatest hits.

The song lyrics, translated for non-Scots like three-quarters of me, sing that you can’t throw a jelly sandwich out of a twenty story apartment building window, from mother to hungry kid playing in the street, as 700 hungry kids can testify, as whether or not it’s butter, cheese or jelly, the odds are 99 to 1 it will hit the ground.  With each verse, the singer’s mother threw a sandwich down each day, but the first day it flew up into the sky and now the kid can see it each day as it orbits the earth, the second day it hit a pilot in the face, who went into a war flashback, and the third time it disappeared into the Salvation Army’s tuba.  The final verse sings that they’re trying to apply to Oxfam for aid, and going to march to the center of town for civil rights, such as no more housing projects over sandwich-flinging heights.  The song remains a chilren’s favorite in Scotland, and many Scots say they remember singing it from school.